WASHINGTON (Sinclair Broadcast Group) — The direct impact of the coronavirus has been extensive, costing nearly 2,400 lives and impacting families across the country. Those are not the only fatalities.

Mental health experts have been warning about the increased risk of suicides as well as drug overdose deaths as a result of the coronavirus pandemic.

In a new report in the Journal of the American Medical Association, researchers warned that the social distancing measures that have been credited with reducing the spread of the virus were also fueling the factors that often drive people to suicide.

“Secondary consequences of social distancing may increase the risk of suicide,” the authors wrote. Those consequences include economic stressors including unemployment, social isolation, lack of community and religious support, anxiety related to extensive media coverage and an increase in firearm sales. Additionally, research has shown seasonal fluctuations with suicides tending to increase in the spring and summer.

Public health officials have been able to point to models that indicate tens of thousands and possibly over 1 million lives have been saved because people are enduring the hardship of staying at home. Quantifying the longterm effects on mental health and mortality as a result of the pandemic response tends to be less exact.

The cure for mitigating the spread of the virus has come at a staggering cost. Nine in ten Americans reported their lives have changed as a result of the pandemic. More than 16 million have applied for unemployment insurance in the past three weeks. Citing hardships, nearly one-third of Americans didn’t pay their rent in April.

“Unemployment will lead to increases in suicide, substance abuse, domestic violence, homelessness and food insecurity,” wrote Johns Hopkins University professors Stefanie DeLuca and James Coleman, explaining the costs of social distancing disproportionately impact the poorest and most socially vulnerable. “Thousands of people will die from these causes, and many more will be severely injured and traumatized for life.”

Discussions about the longterm effects of the coronavirus response on mental health and mortality have been controversial, given the immediate need to prevent virus deaths. It’s still unclear how deadly the virus will be. It’s unclear how long the economic downturn will last or how high unemployment will get, though the Federal Reserve has estimated it could reach 30%.

Dr. Harvey Brenner of Johns Hopkins University has spent decades researching the relationship between unemployment and mortality. In an oft-cited study from 1977, he suggested that for every 1% increase in national unemployment, the suicide rate would rise 4.1% and total mortality levels for the country would rise by 2%.

Those rates have undoubtedly changed over the years but Brenner’s research has consistently demonstrated a correlation between high unemployment rates and increased mortality, as well as the converse, that low unemployment corresponds to lower mortality.

Research into substance abuse has also strongly suggested a relationship between sudden increases in unemployment and a spike in overdose deaths.

While the study supported the notion that economic downturns can lead to a rise in so-called “deaths of despair,” there are limits to its applicability in the coronavirus pandemic.

“I still believe the relationship we found is still there,” explained Alex Hollingsworth, a health economist at Indiana University and an author of the 2017 study. “When we observe a macroeconomic shock to an area we might be more likely to observe substance use and abuse…but whether that’s related to the coronavirus unemployment or other factors will be difficult to say.”

The coronavirus is expected to hit individuals with substance abuse disorders “particularly hard,” according to the National Institute of Drug Abuse.

Individuals with substance abuse disorders are typically at a higher risk for respiratory illness, or heart and lung complications related to drug use, making them more susceptible to more serious complications from COVID-19.

Many who struggle with addiction are already “stigmatized and underserved by the healthcare system,” NIDA explained, and they will likely experience even greater barriers to treatment.

Individuals in recovery face similar challenges as those with mental illness, namely isolation and changes in how they get support. Mental health professionals and substance abuse support groups have made it a priority to transition to telehealth platforms. Here is a list of online resources to help those struggling with substance abuse.

Suicide remains the tenth leading cause of death in the United States. More than 48,400 people died from suicide in 2018, according to the Centers for Disease Control and Prevention, a 35% increase since 1999.

Despite nationwide disruptions and challenging stressors, the National Suicide Prevention Lifeline reported that they had not experienced a significant increase in call volume, though they acknowledged that could change as the country moves through the different stages of the disaster.

There has been a significant spike in calls to SAMHSA’s Disaster Distress Helpline during the coronavirus outbreak. The help line was set up to offer 24/7 support to anyone experiencing emotional distress related to a natural or manmade disaster.

During March, the Disaster Distress Helpline saw a 338% increase in call volume compared to the previous month, reported Vibrant Emotional Health, which administers both the suicide and disaster distress lines.

That could be a positive sign, according to Dr. Brian Hepburn, the chief executive of the National Association of State Mental Health Program Directors (NASMHPD).

“What that means is a lot of people are concerned about the current crisis but it hasn’t translated into people being increasingly suicidal,” Hepburn said. “At this point, we’re not seeing that.” 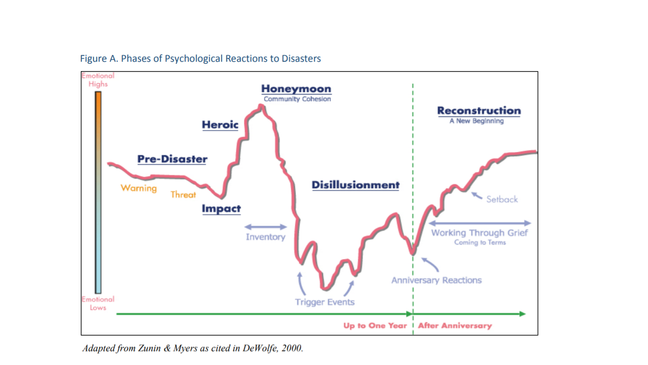 According to a report by SAMHSA, there is not a definitive link between natural disasters and increased suicides, especially in the United States. One critical finding in the report was that “resilience is more common than not among disaster survivors.”

Of those who did experience negative mental health outcomes, suicidal ideation and planning, as well as post-traumatic stress symptoms, typically started several months after the disaster.

“In terms of the suicide risk, the longer this goes on and as more people become despondent, financially concerned, without jobs, there is going to be a greater risk for people to have a significant increase in mental illness and suicide,” Hepburn advised.

Studies have also shown the most significant increase in suicidal thinking and suicides happened six months after the disaster. The researchers attributed that to the lingering issues people deal with after a disaster, including disillusionment, hopelessness and helplessness, states of mind that correlate with high suicide risk.

After weeks of the economic shutdown, President Donald Trump speculated there would be “suicides by the thousands,” as well as depression anxiety and “massive drug use.” Trump warned at the end of March, “We can’t have the cure be worse than the problem.”

The White House and Congress have already approved $425 million in funding for substance abuse and mental health in the latest coronavirus stimulus package. A fourth coronavirus relief bill currently being debating in Congress could also provide additional resources for states and territories to manage the mental health fallout from the crisis.